Chapter 2 in the series WHO STOLE THE LAND? 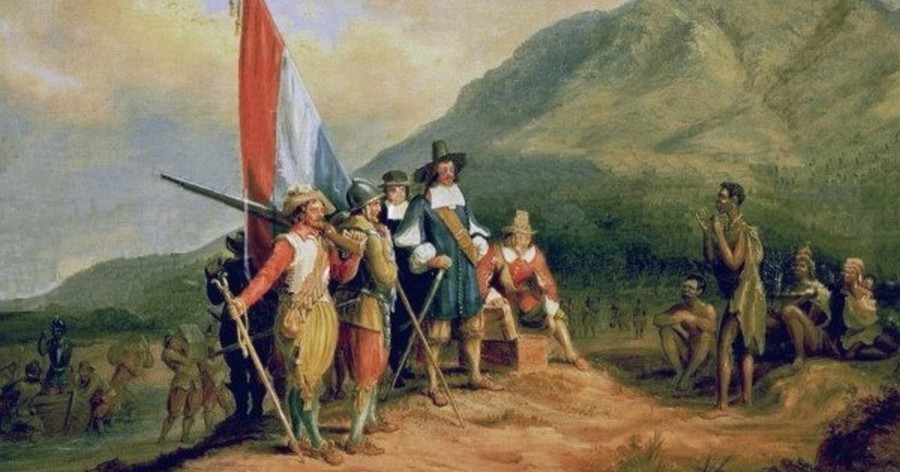 ♦ The Dutch and the Khoi

When the Dutch first stopped by at the Cape of Good Hope in the early 1600s, the people they found there were Khoekhoe. That was still the situation in 1652. Those near the settlement were the beachcomber group under Autshumao, better known as Herry. The Cape Commanders gradually expanded their understanding of the distribution of the Khoekhoe people. However, there was zero overland contact with any Black Ba’Ntu people for the first fifty years.

Eva Krotoa, the Khoekhoe interpreter, told Commander van Riebeeck that the dark Chobona1 people (likely the Ba’Ntu) lived far beyond the other Khoekhoe clans. Unfortunately, Van Riebeeck was utterly obsessed with the fictitious Kingdom of Monomotapa and gold. Hence, whatever the Khoekhoe told him was filtered through this obsessive bias. He also knew nothing about the deep interior of the country beyond his mistaken belief that this mythical “Golden” Kingdom was within striking distance toward the interior. This he based on Portuguese reports of the interior along the Zambezi River and its drainage basin.

By the early 1700s, the Dutch had developed a picture of the distribution of the Khokhoe/Khoi people.  None of them had any agriculture and they lived essentially as semi-nomadic clans rather than nations. They appeared to have no metalworking technology and were thereby of the Stone Age.  Their rituals bordered on the bizarre, such as removing one testicle from every young male and a finger from any woman who had lost a husband. The Dutch, along with visitors to the Cape, were variously intrigued and revolted by several of their practices. The fact that they covered themselves in pungent rancid animal fat and soot did not help. They in turn looked down on the Dutch for working the land – slaves to the soil.

The nation-clans were distributed for hundreds of miles to the east and somewhat less dramatically to the north from the Cape.  Somewhere to the east were the powerful Inqua Khoi and somewhere to the north were the apparently more successful Namaqua. The suffix “-qua” means “people”. The northeast interior was the dry semi-desert home of the physically small and distantly related San Bushmen, armed with bows and arrows and terrifyingly slow-working deadly poison on those arrows. The Khoi/Khoekhoe called them the Obiqua; the “murderer people”. This is a good point at which to point out that the Bushmen who remain today do not at all appreciate the term “San”, considering it derogatory. It is a good example of latter day professors trying to be politically correct and getting it exactly wrong.

♦ The Wreck of the Stavenisse

Some forty years after the wreck of the Nossa Senhora d’Atalyah, on the night of 16 February 1686, the Dutch East India Ship Stavenisse was wrecked some 70 miles south of the present Durban, placing it near the present Port Shepstone on the Mzimkhulu River. By early 1689, survivors from no fewer than three Dutch and English shipwrecks, including a boy from a French shipwreck, arrived at the Cape as a result of the efforts of the survivors. Some of the survivors were rescued by two separate ships sent to search for them. The story of the Stavenisse and its phoenix, the Centaurus, is a dramatic one for another day. Collectively, the survivors provided the best ever overview2 of the people of the Southeast Coast of South Africa up to that date:

When the first survivors were rescued, it was discovered that forty-seven had set off southward overland for the Cape, twenty-one had been rescued, seventeen had died or been killed by San, and the fate of nine was unknown. As best we can tell, no one made it alive overland to the Cape.

♦ In the Words of their Own Tribal Elders

In 2008, a Commission of the present amaXhosa-dominated African National Congress government launched an investigation to resolve the age-old feud between the amaGcalecka and amaRharhabe Royal Houses of the amaXhosa regarding which house is the predominant one. As we have seen above, the amaXhosa were the Ba’Ntu tribe closest to the Cape of Good Hope in 1686.

So, let us now turn to page 9 of the summary by the amaXhosa Elders in the report3 of the above Government Commission, titled Determination on amaRharhabe and amaGcaleka Paramountcies, Article 81351, S.A. Government, dated 28 April 2008. We quote verbatim (author’s emphases):

4.1. According to oral narratives and written sources, the history of amaXhosa starts with Ntu in North East Africa. Ntu begot Mnguni who begot Xhosa, Luzumane (Zulu), Swazi and Ndebele. Xhosa moved from North East Africa and settled on the land between Mzimkhulu and the then Cape Colony.

4.3 After the death of Nkosiyamntu, a division took place as a result of a succession struggle.

4.4 Tshawe, the son from iqadi fought and defeated his brother Cira from Indlunkulu and Jwara from Indlu Yasekunene to usurp Ubukhosi. [Author’s comment: From this point onward, the story of the amaXhosa becomes less mythical]

4.5 Cira became a subject of Tshawe, whereas Jwara fled to his mother’s people, [the] amaBhele. He established his own traditional community.

4.6 Tshawe established AmaXhosa kingship through conquering various traditional communities including the Khoisan. These communities acknowledged Tshawe to be their leader and king. They were absorbed to form the nation of amaXhosa and shared isiXhosa customs, language and culture.

4.7 Tshawe was buried at Ntsibakazi in Umzimkhulu. He was succeeded by Ngcwangu and later Sikhomo who led [the] amaXhosa in a south westerly direction towards the sea. He was buried beside the Cumngce, a tributary of the Mthatha river in the Ngqeleni district.

4.8 Sikhomo was succeeded by Togu. Togu was succeeded by Ngconde [who, by the calculation* of Peires, reigned around 1675], and Tshiwo respectively. [The]AmaXhosa therefore lived in Ngqeleni for three generations. However, during the rule of Tshiwo, they lived west of Mthatha river in the Mqanduli district.

4.9 Tshiwo was succeeded by Phalo who settled beside the Tongwana, a tributary of the Gcuwa river.

4.10 Phalo had two sons who played a significant role in the history of amaXhosa: Gcaleka, heir and son from the great house and Rharhabe from the right hand house.

By their own oral history, as documented by a formal Commission of the present ANC-led government of the Republic of South Africa, the amaXhosa Elders record that the people of their nation were immigrants to the country that would eventually become South Africa, and that they were still migrating southwestward by steps at the Mtata River even as the Dutch were already established on the continent to the west. They also maintain that the amaXhosa lived far beyond the great Kei River in the half-century after the Dutch settled the Cape. And, according to the survivors of the Stavenisse, it was San Bushmen who lived further south along the coast.

FIG.1-1 below (click to enlarge) describes the migration of the amaXhosa Black people as per the above down the eastern coast of what would later be South Africa. Bruintjeshoogte, discussed later below, is 400 miles as the crow flies from the Cape of Good Hope. The Mzimkhulu River is some 800 miles from the Cape on the wing of the same crow.

♦ The 1689 Ensign Isac Schryver Expedition to the Inqua

On 4 January 1689 an expedition under Ensign Schryver set off to the land of the Inqua people4. After about a month of journey, the Inqua were found living in the vicinity of the present Aberdeen, west of the present Graaff-Reinet. The Inqua referred to several nations to the east, some of whom lived in clay huts, but none  can be unequivocally stated to be Ba’Ntu in culture. Most significantly, they knew of and traded with the Gonaqua Khoekhoe, who were definitely in contact with the amaXhosa. Interestingly, they also had some form of contact with a people they called the Briqua, and referred to them as cannibals. They would later be revealed to be the Ba’Tlaping tribe of Ba’Ntu people to the far north in the interior and unrelated to the Coastal Black people (the Nguni) of South Africa.

In 1702, a hunting party of forty-five white men and forty-five Khoekhoe was attacked by a party of amaXhosa at the Fish River (below – near the coast, looking inland). Neither side had anything to be very proud of in the engagement. Theal5 describes the hunting party as “miscreants” and the amaXhosa as “fugitives from their own country” [see Chapter 3]. It is interesting that Theal does not make more of the event, because it is the first recorded overland contact between White and Black in South Africa. And, significantly, happened an entire fifty years or two generations after the founding of the Dutch Settlement at the Cape. 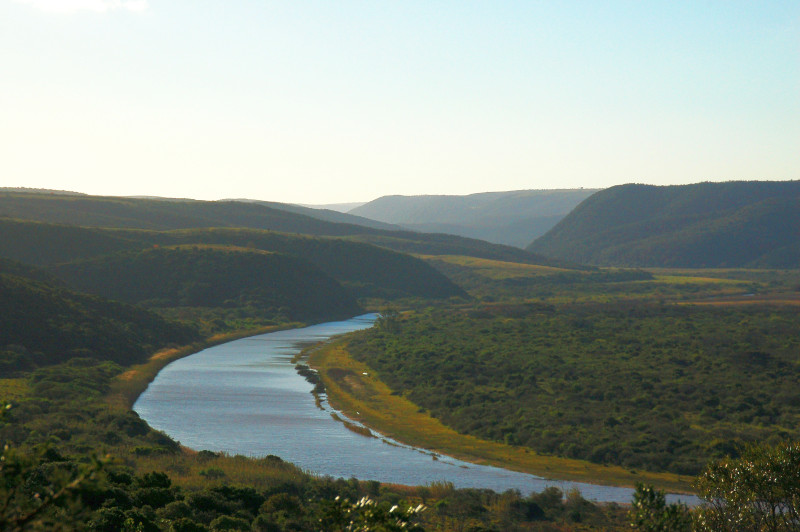 Deeper inland, the ravine of the Fish River is deeply forested with a unique kind of thicket (below) that does not seem to have an equivalent elsewhere on earth. It would become the “Golan Heights” of South Africa. Whoever controlled that strategic ravine could dictate the terms of war. One could hide an entire army in it. 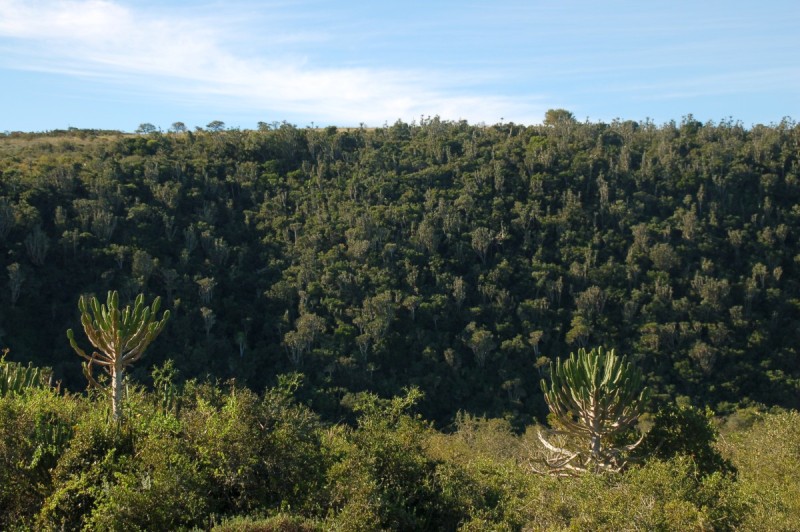 Not much beyond the killing of members of yet another hunting party under Hübner happened between the Dutch settlers and the distant Black people for the next half-century. It would only be in the 1750s that events on the eastern frontier would get serious attention. Much of that attention would be in the nature of the Governor at the Cape trying to rein in, confine, and tax the growing community of frontiersmen. That government would be of pathetically little benefit to the much tried men on the frontier; it was fixated on Dutch East India Company seasonal shipping schedules and the interests of a distant European master. This author’s frontier ancestors would be left largely to their own devices.

In 1707, in the little village of Stellenbosch, my ancestral brother Hendrik Biebault, swings a bag of flour from the local mill at the local Magistrate and yells, “I am an Afrikaner“. In this action he gives the new nation a name. However, for his “insolence” in the middle of a cycle of civil disobedience he is jailed, whipped in public, and banished from the settlement on a Dutch East India Company ship. He would die in the Far East in 1717.

In 1713 the dreadful smallpox makes its way to the Cape and the community is severely affected. However, it is Khoekhoe who have almost zero resistance to this disease. Most of the Khoekhoe clan-nations in contact with the Cape Settlement are effectively wiped out6. The actual brief official Journal entries of the Cape make frightening reading7: “May 2: The air very unwholesome“; “May 6: The Hottentots almost exterminated by the small-pox“, and “June 25: Not 20 healthy people in Drakenstein“. According to the entry for May 9, those Khoekhoe who tried to flee to other groups for safety were killed by them. As a result the remaining proximal Khoekhoe groups cease in effect to be a “people” with an own culture and language. Further afield, among the Namaqua (in the north) and the Gonaqua (in the east), the disease does not seriously take hold. The San Bushman similarly escape its ravishes due to the fact that they shun other people. A second epidemic would hit the Cape later and further wreak havoc on the people.